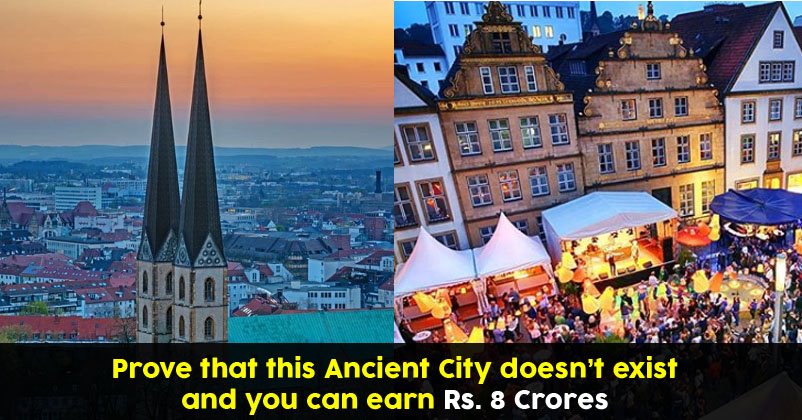 Hey, we aren’t trying to fool you with the title nor this is a drill. This is actually happening and you get the opportunity to be Richie rich.


Bielefeld is a 800 year old city in Germany with approximately 3,00,000 residents. But there is a very old theory doing the rounds that the city is non-existent. Few theorists even believed that green aliens secretly use the city’s University. While others think it’s the Central Intelligence Agency (CIA).

Apparently 25 year ago a computer science student Achim Held left a message on the Usenet group.de.talk.bizarre that Bielefeld doesn’t exist jockingly since then the news spread like wildfire, as per the reports of the Newsweek.

Wondering why he did that because he wanted to make fun of the culture of conspiracy theory as the roads were blocked back in 1993 – 94 as construction was going on and their was no route connecting the city. Since then conspiracy is still going on and on.


So finally the city officials have decided to rest the case for once and all. They came up with this unique challenge #bielefeldchallenge. If you’re 16 ablove then each one of you can take part in the challenge. As per the rules members of intelligence agencies, Illumanti and Achim Held cannot apply!

All you need to do is present solid proof that Bielefeld doesn’t exist in English or German and you can take home 8 crore rupees. The competition is going to end on 4th September midnight!

What are we waiting for, let’s try our luck guys…..

James Neesham Shuts Down A Troller With His Witty Reply
Can We Survive If The Amazon Rainforest Disappeared?