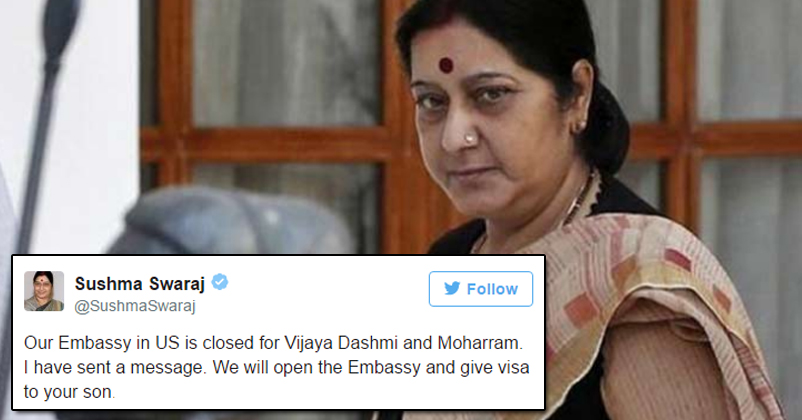 Just drop a tweet and she reaches back to you in the nick of time and uses her resources to solve the problems. While most of the political leaders and parties uses the Social media as a means to express their displeasure, to make allegations and mock rival parties. Sushma Swaraj has made social media a new platform for the people to ask for help directly from the government.

Sarita Takru who lost her husband recently, on Tuesday morning, tweeted to the External Affairs Minister Sushma Swaraj asking for her help to get an Indian visa for her only son Abhai Kaul, who is currently in the US, so that the son could reach India in time to attend his father’s last rites. Indian Embassies in the US were closed for Vijayadashmi and Moharram. It was almost impossible for her son to make it in time.

@SushmaSwaraj lost my husband ystrday. My only child, Abhai Kaul, Am citizen, can't get Indian visa before Local Thursday. Is this human?

This dreadful wait must end. Please give my son Indian visa in US so his father may be cremated. Please support. Need empathy.

Sushma Swaraj saw the tweet, she quickly responded, asked the mother for her son’s phone number so that she could extend help.

I am sorry to know about the sad demise of your husband. Just wait – I will help you. https://t.co/KSvgSZtq8R

In prompt response to a request by a mother, the External Affairs Minister Sushma Swaraj on Tuesday directed Indian Embassy in Washington to grant visa to the son so that he could attend his father’s last rites despite the fact that the Embassy was being closed for two days for Vijaya Dashmi and Moharram.

Our Embassy in US is closed for Vijaya Dashmi and Moharram. I have sent a message. We will open the Embassy and give visa to your son. https://t.co/W5may5dy0H

Soon after Sushma instructed the Indian Embassy in US, the Embassy requested Takru to share her son’s details so that visa could be granted quickly.

Thank you mam for such a kind gesture. We are so proud of you!

Virat Kohli Lashes Out At Harbhajan Singh For His Tweet Blaming The Pitch For Less Wickets!
New Law – Men Can Divorce Their Wives If She Denies Sex For Long Time!