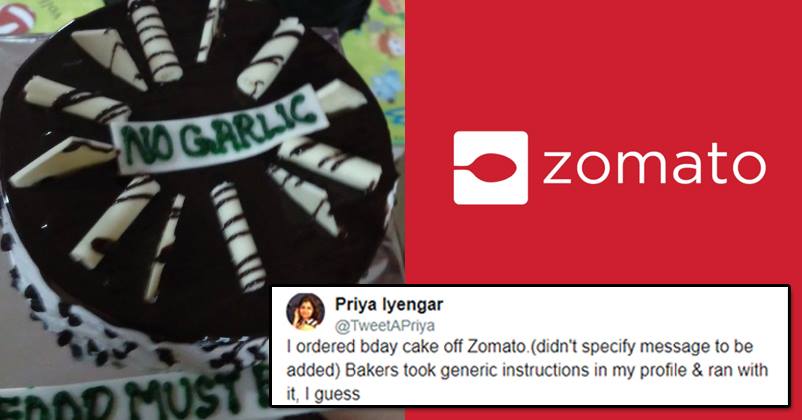 Customers lose their cool when they order something online and get the not-so-expected thing delivered. Some of them give bad reviews to the company while some of them tag them on social media handles and ask them for an explanation. Then, there are some others who prefer to ignore the matter and move on.

However, this conversation which we have brought to you today is damn hilarious. Resident of Mumbai Priya Iyengar shared her experience with Zomato on Twitter and got an unexpected reply too.

Well, she had ordered a cake from the site and got it too; however, the message written on the cake was totally unexpected. Priya hadn’t mentioned any specific message as such, but still, Zomato wrote generalized instructions on the same. The cake carried the message, “No garlic, food must be spicy.”
She shared the pic with everyone and wrote,

“I ordered bday cake off Zomato.(didn’t specify message to be added) Bakers took generic instructions in my profile & ran with it, I guess.”

I ordered bday cake off Zomato.(didn't specify message to be added) Bakers took generic instructions in my profile & ran with it, I guess pic.twitter.com/xo7iEZN1MU

She once again tweeted that she reached out to them but they just closed the matter by sharing few chuckles.

so the Zomato team kindly reached out to me with an explanation.. few chuckles were shared and matter closed.

Guess Zomato knew that the error was a big one. They apologized & sent her one more cake with a superb message, “Sorry From Zomato, The cake is not spicy.” This is the fresh cake..

.@Zomato..aww, you guys.. thank you for the cake. PS. I saw what you did there with the message pic.twitter.com/WVfZgnCAuu

The tweet read, “[email protected], you guys.. thank you for the cake. PS. I saw what you did there with the message”

We are glad that Zomato acknowledged this blunder and showed a wonderful gesture. They could have ignored it too but they chose the other way.

Continue Reading
You may also like...
Related Topics:Cake, Zomato

Mika Introduced King Khan To A Crazy Fan. SRK Had The Best & Subtle Reply To It
Journalist Asked Deepika If She’s Getting More Pay Than Ranveer & Shahid. She Gave Smartest Reply